You are here: Home / Advice / Time To Switch to the Gentle Cycle When Washing Hair?
Pin11
Share
Tweet
11 Shares

Hate what it does to your hair?

What’s that, not sure it’s doing anything to your hair? Hmmm. 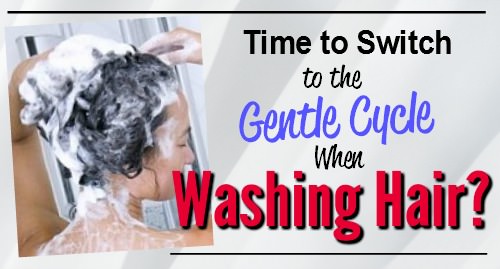 Or maybe you’re just confused about all the fuss when it comes to sulfate free shampoos?

Is this hype or something you need to pay attention to?

We all know, or should know, some shampoos, especially those that are loaded with extra bonus lather, have a deep, dark secret. That is they are loaded with sulfates, or strong cleansing agents that can be hard on our hair.

Sulfates Defined: These are cheap foaming agents which enable a shampoo to lather up with a bounteous amount of foam and suds. Added because too many wrongly equate cleansing with bounteous amounts of foams, suds and lather. Guess you could basically say shampoo producers are just giving us what we want. Or giving us what they have trained us to want.

Plus if you end up with a head of lather you probably are using too much of the stuff to begin with. But even if you are somewhat judicious with how much you squeeze out of the bottle you may still be using shampoo stuffed with sulfates. Yet even in somewhat limited doses sulfates are not the greatest thing for our manes.

Yet there’s more to this.

Truth is we all color our hair. Well anymore almost all of us. As a result those of us who do color want the vibrancy of the hue to last beyond next week. Yet washing your colored locks with products that include sulfates is a kind of death knell to tinted tresses since these chemicals are so hard on the color.

Why is this? Turns out the chemicals responsible for the lather stripe away the color. They also sap the moisture from your strands. So what is seen by some as a good thing really isn’t. It kills the color and dries out your hair. Or what’s to like? Especially if you have curly hair which is naturally drier to begin with. Why compound the problem with anything that is going to dry is out further?

On top of this these chemicals tend to irritate sensitive scalps not to mention dryer hair tends towards split ends easier too. 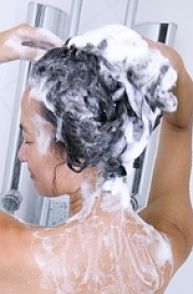 Some go so far as far as this article about why the uproar over sulfate free shampoos does, to suggest sulfates may be the cause behind premature hair loss. For sure if your hair is dry it is not going to be anywhere near as shiny or supple as you’d like.

Anyway as word of these negatives spread the popularity of sulfate-free formulations soars.

So while it’s hard to break the lather habit and put your hair on the gentle cycle, the results of doing so can be dramatic. You’ll likely see you hair in a whole new light. Like you’ve never seen it before. And that may be enough for you to give up the lather habit and use a non-detergent based shampoo forever.

The closer to the first things listed any of these are in the list of ingredients on the bottle the more of this agent is in your hair cleanser. Which means the harder that product is going to be on your hair.

Just remember all cleansing agents, both naturally derived ones or chemically concocted ones, are going to have some effect on your hair. They all are designed to remove oils. The better shampoos however will temper any drying influence with hydrating ingredients that can offset that to a certain extent. Which can leave your hair feeling softer and protect the color better than were you to use more traditional. sulfate laden, formulations.