Struggling to grow your hair longer?

Does it seem split ends are forever sabotaging your efforts no matter how faithfully you apply replenishing products and moisturizing hair masks?

Or at worst does your mane resemble the business end of a broom? 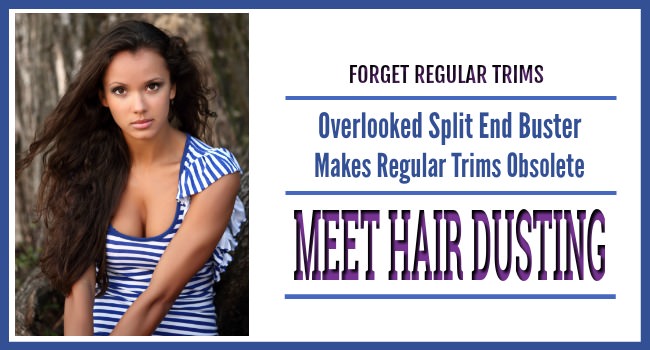 If any of this sounds like I’m speaking a foreign language, please raise your hand.

Yeah I didn’t think so. No hands raised.

That’s because we’re ALL too familiar with the trip to Splitsville.

That’s because we’ve ALL have had problems with split ends from time to time. No matter how resilient our strands and despite our best efforts at hydration.

For ages we’ve all heard that for your hair to live long and flourish regular trims are a must do. Fail to do so and those pesky split ends will treat your inaction as an invitation to run up your strands. Thinning and weakening them until they break while inviting dullness in the process.

But are regular trims really the best way to stop split ends in their tracks?

Despite being as touted THE approach to prevent split ends from proliferating – maybe not.

And that “maybe not” is a problem.

So if regular trims are wrong what’s right?

Think of it as a spa day for your hair. Or a way to refresh your locks by getting rid of the splits yet retaining the length.

This is not unlike shearing those annoying fuzz balls off sweaters. Very similar actually.

Better still it’s a process that helps most anyone looking to hold on to as much length as they possibly can as they go for longer, healthier locks. That’s because you’re only taking off maybe an eighth to a quarter of an inch off some strands.

Here’s the How To

There’s two super helpful DIY video segments further on down this dusting guide that show you how. So you’ll definitely want to check those out.

But basically the idea is to make the frayed strands stand out so you can shear them off.

Believe it or not there’s definitely things you can do to make this happen.

First, and this may be obvious, but you only want to dust dry strands.

Also it’s really best to do this with the help of a strong light. Better still is sunlight.

If you don’t have sharp hair shears don’t bother. You won’t get a clean, healthy cut.

You’ll want to work with smaller sections maybe no bigger than a quarter of an inch wide.

To get there divide your mane into four or five manageable sections.

Clip up and out of the way those not being worked on.

From the remaining target section select that quarter inch part to dust. Dust away.

As you go clip the dusted sections up and out of the way too.

Ultimately you’ll want to go all around your head from one side to the other. But it’s unlikely you’ll be able to do that in one go.

I’ve also read that if at all possible you want to cut the strands at an angle not straight across. That’s because a diagonal cut is best if you’re looking to prevent future splitting. But honestly this is easier said than done. I suspect it applies more to trimming, point cutting?, than dusting.

Then this last point here is important. And maybe surprising. Splits are not always at the end of the strand. If they’ve begun to move up towards your scalp they’ll be mid shaft or higher.

But don’t worry. The two video segments coming up will show you how to deal with these.

How Often Should You Dust Your Hair?

Yeah, a good question frequently asked is “How often should you dust your hair?”

Generally you’ll want to repeat the process every 4-8 weeks.

The answer really depends on how much you’re into hot tool styling, coloring, or chemical processing in one form or another. All are tresses stressors. All lead to frayed ends.

So here’s what you do. Simply set aside time to dust more often if you often engage in hair damaging activities. (And you know who you are.)

Of course if you are just getting into this and you haven’t trimmed much less dusted your tresses for three, four months or more, then you’ll likely need a trim more so than a dusting. That’s because you’ll want to start clean since if you just start off dusting aay, you’ll be undercutting the point where any actual damage begins which isn’t going to help as much.

Still over the long run dusting is a great way to give your locks a health boost without sacrificing length. Plus it’s the absolute best approach for those with fine, more delicate, strands.

Take a small section of hair between your index, middle and ring fingers positioning them near your scalp.

Slide the fingers down the selected section.

What this approach does is smooth out the hair while making it just a little taut so the bits that need dusted off pop up. Snip off those problem bits and you’re good.

Twisted strand is a variation of the three finger method. It’s lets you take a closer look at your hair so that the parts needing to be snipped off will be obvious.

To get the most out of this approach, twist once going in one direction, then release and twist in the opposite direction.

This too is a great way to clean things up.

Of course about now you also should recognize this is going to take some time. Possibly a long time. And you’d be right. It is very time consuming.

This is exactly why many stylists won’t do it. The split end dusting process is almost like a haircut by itself only with just a tiny fraction of the hair cut off.

Still can you see why this is the perfect mane grooming technique for those trying to grow out their strands despite the friction they expose it to?

Let’s back up a step and explore root causes of split ends.

Often the damage is done before you can even see it.

Dusting may not help to get rid of those microscopic tears in the cuticle layer of your strands. But it can relieve you of the obvious splits leaving your mane healthier and less susceptible to further damage.

So what to do about the ones so small you can’t see them?

And by prevention I mean eliminating, or at least minimizing, sources of friction.

Because every day we do things without thinking that damage our locks.

For instance did you use a terrycloth towel on it today?

Is a ponytail your go to style?

Last night did your hair find itself rubbing up against a cotton pillow case?

These seemingly minor insults all add up over time. So much so those seemingly insignificant daily frictional encounters eventually cause your strands to snap, crackle and pop. Or a split is born.

Since the purpose here is to explain dusting I won’t get into a lot of detail on the source of friction and corresponding friction fighters. Instead, let look at this section as more like little things to think-about rather than complete solutions.

Source of Friction: Your trusty cotton pillowcase
Friction Fighter: Go with a silk alternative. If that’s not possible tie your hair up in a silk scarf.

Source of Friction: Teasing or backcombing
Friction Fighter: Do this sparingly

Source of Friction: Piling hair on the top of your head when washing
Friction Fighter: Shampoo when it’s down

Source of Friction: Tightly pulled back buns, ponytails or topknots.
Friction Fighter: Mix things up. Go with low one day. High the next. More relaxed the day after.

Source of Friction: Handbag straps especially metal ones
Friction Fighter: Those with shoulder length or longer hair need to keep their precious strands from getting trapped under the strap on their shoulder. Especially if it’s metal.

There, No More Split Ends Judging You

If you hate losing half an inch or so of hair to a trim for split ends when trying to grow it out then maybe dusting is the thing for you. Because damaged hair is inevitable. But a serious, length losing trim does not have to be.

I recommend dusting if nothing else to extend the time between trims. Sure you’ll still need clean up trims from time to time. But you can go a lot longer without them by removing the split ends that remain in hair for a long time and just keep splitting up the shaft until breakage occurs and you lose length in the end.

In addition by cleaning up the frayed and fried ends you hair will be downright gorgeous. It will look longer, healthier, and shinier. With fewer split ends left to mock and frustrate you.