You are here: Home / Advice / How To Point Cut Your Own Hair | Beginners Guide
Pin9
Share
Tweet
9 Shares

Got thick, straight hair in desperate need of more movement or less bulk?

You’ve heard of point cutting but have no idea if that’s how to add the badly needed bounce, body and pizzaz?

All you know if what you’re seeing on your social media feeds and what you see in your mirror aren’t matching up. And who wants to feel like they’re stuck with an clunky, outdated look?

What’s that? You don’t want to sacrifice too much length either?

The good news is OMG-orgeous layered hair is but a few snips away. As long as they’re the right snips. Point cut snips to be exact. 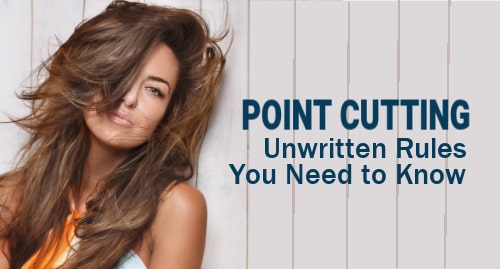 If you’re still with me then let’s dive into the techniques you need to know to make the magic happen.

Oh and contrary to what you may have heard point cutting the right way doesn’t make hair look thin and wispy. So no worries, right?

How To Point Cut Your Own Hair

Okay so you want to know how to get rid of blunt ends on your hair, huh?

Point cutting hair is definitely the technique you’ll want to use.

This technique adds texture to the ends of thick, coarse hair.

But just what does it mean to point cut your hair? Good question. Basically…

With point cutting the ends of hair are held between your index and middle fingers. Sliding the points of shears you’re vertically snipping away tiny bits of hair to create soft layers. The angle you cut at determines how much or how little hair you take off with each snip.

As a result you’re going to get more movement, texture and a free flowing look. Reason being this gives a bit more separation through the ends.

Tip: Fanning the hair while holding it firmly makes it easier to see how much weight you’re removing.

Problem: Point cutting puts your fingers at risk – but there a trick for that.

The secret is know how to do this so as not cut yourself. Well, doh!

Basically you need to be aware of where the tip of the scissors are in relation to your fingers at all times.

So you slide them into your hair. Then as you are pulling them out you’re closing the blades and clipping the hair as you do.

So again the pro secret is to pull the blades away your fingers as you’re cutting.

When watching someone who does this you can’t even tell the cutting action happens as they move the blades away from the hair. So here’s a demo of just that.

Another approach? Some suggest resting one tip of the shear on your finger. They then move the shears along the length of their finger, snipping as they go, to avoid cutting yourself.

Not as a big of a fan of this approach to be honest. But it is another way to do it.

Tip: DIYers want to start by trimming maybe a quarter of an inch just from the very tips. This will help you shed extra weight from the ends and only the ends.

When you change to a wider angle you’re not only cutting off more you’re going to be creating ends that are more visually potent. Some refer to a more diagonal angle as notching.

Also how far you slide the blades in matters. Stylists refer to this as the DEPTH of the cut.

You only want to go deep if you want to infuse texture and softness deeper into the hair.

Also keep in mind this means these layers won’t be going away any time soon. You snip out a couple of inches of hair it will take a while to get back to one length should that be what you decide to do. Just saying.

Hopefully you are beginning to see that when you have thick, stick straight hair and want it layered, for things to flow and look blended you simply must point cut. Period.

Then there are different techniques. This video demonstrates four ways to approach point cutting.

Fanning
Using your fingers fan the hair to spread it out. Then go kinda deep into it but keep the scissors vertical (at 90 degrees) into the hair. That way you are only snipping away bits of hair not huge chunks.
Why Use: To remove a bit of weight.

Bulk Removal
If you wanted to remove more bulk change your angle to more of a 45 degree angle. You don’t go as deep with this technique.
Why Use: To get rid of weight and create more of a textured look.

Sliding Bulk Removal
Position your fingers to the depth you want to point cut going as deep as mid shaft. Start out by point cutting to your fingers. Then slide your fingers towards the ends as you continue to point cut randomly holding the shear fairly vertical.
Why Use: To remove bulk and leave you with ends of varying lengths rather than cutting following one distinct line.

Precision Point Cutting The intent of this technique is to create a soft broken line in the hair. When done it should fall nicely and give you the texture you’re looking for.
Why Use: To get a texturized look.

Hopefully too, this answers the question “What does point cutting do to your hair?” The answer different techniques produce different results that can remove weight and add texture.

Whether blunt or point cutting is best comes down your hair’s texture and how to get the most out of it.

Those with fine and/or thin hair need to create the appearance of fullness. You know, to add body and structure? So they want to blunt cut their ends since that tends to thicken up your mane.

While those with heavy and coarse or thick, straight hair need more movement and flow to their strands. For them texturizing point cutting of the ends is just the ticket.

This video gives a stylist’s view of both techniques.

This demo does one side point cut and the other blunt cut to show the difference.

Here’s the basic takeaway from this video.

Blunt cutting is better for fine hair because you want as blunt of an edge as possible.

Point cutting is great if you’re looking to remove excess bulk – making it the best technique for those with thick coarse hair.

One of the best things in this video was the side by side comparison of blunt vs point cutting. You can see the difference in the outcome between point and blunt cutting. That starts around about the 7:27 mark and runs until about 9:58. 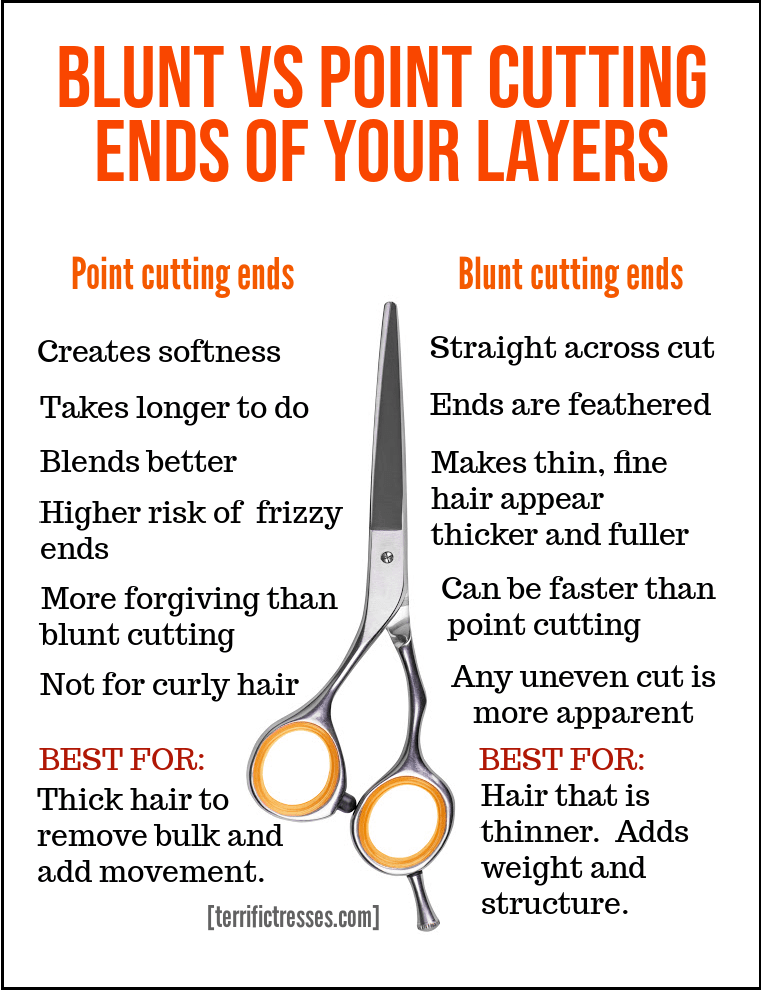 Actually while they’re different they are also somewhat the same.

Thinning shears let you thin out longer hair simply by cutting into a section, moving down a an inch or two cutting again, moving down again and snipping once more.

This method makes it easy to remove bulk from much of the length of long strands. Or something you can’t do with point cutting.

Here’s a quick walk through showing that technique in action.

As you know with thinners one blade is serrated. That means it’s got teeth like this DIY friendly and totally affordable choice from Amazon which has 27. It also means they will only take out some of your hair with each cut.

Tip: Avoid going anywhere near your scalp with these. Doing so can create super short pieces that will have a tendency to poke out through the rest of your mane. Not good. So cut no higher than mid strand.

Now the wider the teeth the more hair that will be cut off in one go. Such a robust tool will leave you with a cut that’s more chunky than texturized in my opinion. It’s also probably too aggressive for home users.

Narrower teeth however can be used for blending and softening. They give thicker, heavier hair a more airy feel.

While a narrow toothed shear is more forgiving that still means remembering less is more is smart when snipping with these guys.

Thinning shears are good for removing bulk or weight and creating movement.

Tip: You want the blade with teeth to be on top when cutting to avoid even a hint of a visible straight line in your hair.

One more trick? You can point cut with thinning shears! Here’s how.

What this does is remove less hair than with scissors. Making it ultra-safe. But it still lets you create decent texture at the ends.

So if you have to choose between a decent hair scissors or thinning shears this may make the decision easier.

What Is Deep Point Cutting?

As the term suggests rather than just snipping the very ends with deep point cutting the blades go deeper into the interior of your hair.

Tip: Deep point cutting requires a scissor with a longer blade. Something along the lines of like seven inches.

Now if you’re only making a shallow cut you’ll want a shorter blade. This is what you want to do with fine hair. Coarse straight hair you might want to go deeper. Fine hair not so much. 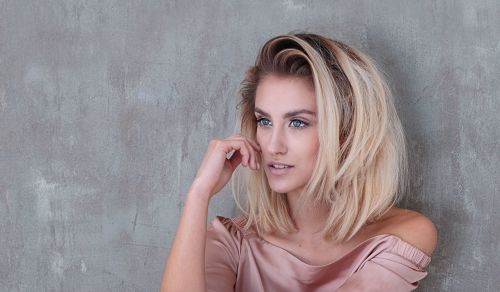 The one takeaway here would be you want a scissor with shorter blades.

Given you’re usually only taking off the least little bit there’s no need for seven inch or longer blades.

Reason being you’ll have better control if you go with a nothing more than a five incher to worry about.

Should You Point Cut Curly Hair?

Actually you probably don’t want to point hair that is naturally curly.

Because as stylist Sam Villa puts it the ends of curly hair need friends to look their best. Eliminate the friends and what have you got? Right. Without the weight you risk opening the door for frizz.

But I have to add not everyone agrees with Sam. Still you may want to approach your curls with caution.

Does Point Cutting Cause Split Ends

It can. If you use kitchen scissors. Fact is the dullness might make split ends worse.

But sharp hair scissors should usually leave your hair with clean crisp ends. Which are going to be less likely to fray. 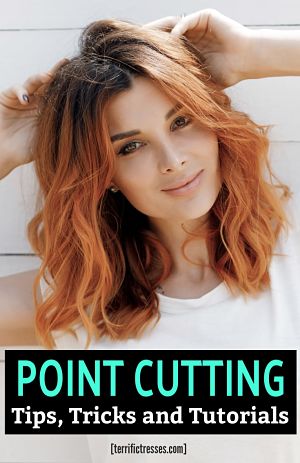 So now that you know how to get a softer, more professional look to your layers may I suggest you follow our Pinterest boards to keep up with all cutting edge ideas we share here. 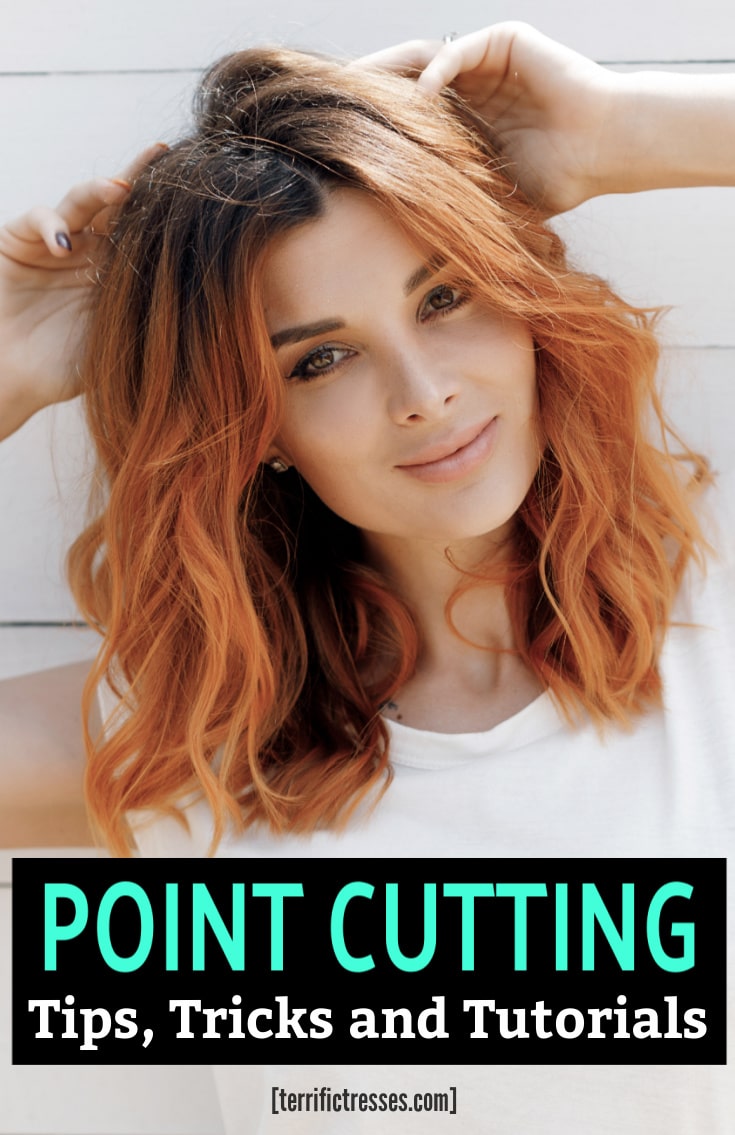