You are here: Home / Braids / Waterfall Braids: The Only Guide You Need to Rock This Hairstyle
Pin531
Share
Tweet
531 Shares

For sure they’re statement styles. You know, it’s a look that throws off a romantic and boho-chic vibe yet with more than a hint of casual elegance?

Plus this oh-so-cute style is kinda like wearing your hair up and down at the same time almost, isn’t it? While in a way reminding you of a crown braid only better.

To top it off any waterfall braid is just the perfect girly look for sweltering summer days. 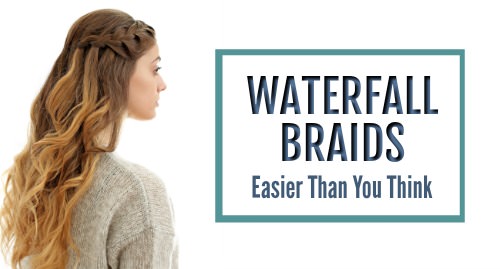 But there’s a problem.

So many of us love the look but don’t have a clue how to pull it off.

I mean it looks so intricate and complicated, doesn’t it?

Like it’s this super tricky mane masterpiece that mere mortals can’t possibly master as these 25 examples might suggest.

Actually nothing could be further from the truth. As you’ll see shortly the good news is even complete beginners can take their hair to the next level with this hairstyle. Promise.

That’s because shimmering, cascading strands like this are really rather easy to braid up once you’ve seen the hairstyle deconstructed into its basic parts. Which is just what we’re about to do.

So much so when asked are waterfall braids easy, you’ll coyly smile and nod your head. Because you know the tricks for how to waterfall braid your own hair that do make it easy.

Even better it’s a braid that works with curly or straight hair…medium length or long hair.

Oh and while it’s a seductively flowing look with long, straight locks it can be super cute with beachy waves which give it a softer kind of vibe.

Here’s How to Easily Add Waterfall Flair To Your Look

Okay since it seems this hairstyle can in some ways become your new BFF, I watched quite a few waterfall braid video tutorials.

My hope was to find a beginner friendly blueprint that clearly explained the process. This first one, I feel, met my expectations.

However before we queue up the tape, there’s a point not mentioned in the first video that needs mentioning.

A waterfall braid usually starts with a low part. Which side doesn’t matter. What does matter is the side then with the most hair is the side you’re going to do the braid on.

With that out of the way it’s video time.

Step by Step Tutorials For Creating That Perfect Waterfall Braid

Admittedly it’s easy to get mesmerized and then lost as I initially was. It was like my brain shut off.

To avoid that happening to you I’ve tried to break the process down into its four basic parts or what I’ve called episodes to distinguish them from the specific steps.

Oh and don’t let the number of steps here (11) psych you out. Once you’ve started braiding it’s basically just three moves (step 8-10) repeated over and over until you have braided all your hair.

Step 1 Grab a two to three inch section of hair towards the front of your head on the side you’re going to braid and divide that into three strands.

Step 2 Do just like any other braid. Add hair to the top (front) strand and cross it over to the middle.

Step 3 Then add hair to bottom (back) strand and cross it over to the middle.

Repeat this two or three times to gets things going.

Not that tough so far, right?

Episode 2) Dropping a Strand and Replacing It

Step 4 Now instead of adding more hair to the bottom (front) strand you want to “drop” it out of the braid so it cascades down like a waterfall. In this case she holds that dropped strand in her mouth to keep it out of the way.

Okay but you’re left without a bottom strand. So now what?

Step 5 All you do is grab some hair directly behind the section you just dropped to replace it. That’s your new bottom strand. Take it and cross it over to the middle.

That’s the hack that makes the water fall work.

Step 6 As before add hair to top strand and cross it over to the middle.

Step 7 Time to once again drop the bottom strand and get it out of the way.

Step 8 Again you’ve got no bottom strand so pick another section of hair right behind the just dropped strand and cross that over to the middle.

Step 9 Add hair to top strand and cross it over to the middle.

Step 10 Drop the bottom strand and get it out of the way.

Repeat this same three step process (steps 8-10) over and over:

You’re always introducing a new bottom strand with each iteration of the braid to replace the one just dropped.

Step 11 Once you’re reached your ear on the opposite side of your head you’re done with the water fall braid. Congrats! You just want to quickly French braid that last bit of hair up and tie with an elastic to secure it.

Or you can just create a little pony tail, again with the last bit secured with an elastic, and then cover it with a strand of hair and pin that in place to hide the hair tie.

One awesome waterfall braid even a beginner can do.

But just in case you want a second opinion this next video should suffice.

Honestly before you go running off, if you’ve come this far isn’t it worth spending another minute or two to get a slightly different explanation?

The other reason for watching this video is you can see what she’s doing from the front rather than the back like the previous video tutorial. That can give you an whole new perspective on how to do this.

Plus she finishes off the braid a bit differently too.

Yet at the end of the day it’s still the same three steps.

Before You Go a Couple of Styling Tips

Let’s finish up with a few quick styling tips that guarantee you look like the hair diva you are.

Got thinner or uber-fine locks? In that case styling mousse is a must have. Applied mid-length and down before braiding it will give you an instant shot of volume and body to spare. Leaving you with hair that looks thicker than it really is without weighing it down.

Added texture is another way to find your way to hair happiness with this braid. Especially if beachy waves are what you have in mind. A little salt or texturizing spray can add extra life to those cascading waves that tumble down from this braid.

Or if you like, a few minutes spent with a curling iron to create some loose, swirling curls before braiding can be time well spent.

But what if you want to amp up the wow factor even further? Some find incorporating ribbon into the braid is great way to do so.

Since long hair is especially glammed up by a waterfall those with shorter locks can always turn to hair extensions to create that effect they’re going for.

Anyway, sometimes all it takes is a simple braid to make you look like a thousand times more put together. If that’s what you’re going for then this all-eyes-on-you hairstyle is the one for you.