You are here: Home / Bangs / Trimming Curtain Bangs Yourself Doesn’t Have To Be Nerve Wracking
Pin
Share
Tweet

No doubt about it curtain bangs are really cute.

They elegantly frame your face giving your style a romantic vibe.

Plus they’re a low commitment fringe.

Still like all brow grazers sooner or later even these low maintenance guys will need trimmed.

But trimming them yourself? Sometimes it doesn’t go that well. Then what?

To avoid that “then what” scenario you need to know a few things before diving in. You know, tips to help you avoid botching the snipping to begin with? 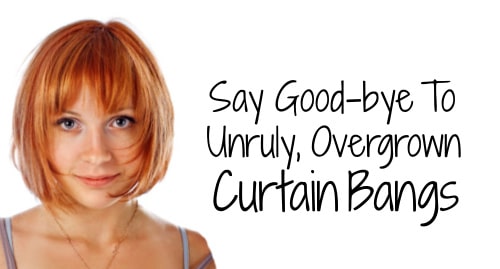 Luckily cleaning up these graceful face framers doesn’t need to a nerve wracking experience. Because it’s really not that hard.

Especially with help like what follows at your fingertips.

We’ve got three seriously helpful videos that cover the ins and outs of successfully pulling of this DIY fringe reclamation project.

Trimming Curtain Bangs Without Messing Them Up By Point Cutting

Point cutting is a great way to keep your Bridget Bardot inspired curtain bangs in trim. Same holds for trimming side swept, wispier or blunter bangs.

It comes with way less risk of cutting off too much.

It’s also a better way to get a balanced cut. Meaning both sides of the fringe end up being about the same length.

Plus you get a less harsh softer outcome what with the texturized ends.

Now if you’re aren’t up on the ins and outs of this technique this quick refresher on exactly how to point cut bangs at home may be just what you need. It includes a detailed step by step overview plus seven must know tips.

Meanwhile the focus here is on bangs that swoop.

Here’s the timestamps to make finding what you want to know about that super easy.

Essential Step by Step by Timestamp

Let’s expand on those.

Separate Out Your Fringe
The obvious first step for trimming is to break out your fringe from the rest of your hair. Keeps you from accidentally cutting hair that doesn’t belong to your bang.

Then after separating out the hair for the fringe she sections out the very middle of her Bardots.

Her next move is to cut that straight across. Kinda risky for first timers. But not if you remember to cut them too long.

Focus on the Middle
Then she “chips in” the entire length of that middle section with the scissors held vertically or straight up and down in relative to your hair. Which limits how much hair any one snip is gonna remove.

The idea is to create texture with point cutting while removing the least bit of length. All without creating even the hint of a harsh straight across line.

Notice too how she puts just enough tension on the hair to keep it gathered together for easier trimming. Doing so without yanking down on it hard.

Tip: Always remember that putting tension on any fringe you’re cutting is dangerous. Cause when you release it it can spring up leaving you with brow grazers that don’t.

THIS IS IMPORTANT: Evaluate How You’re Doing
After going at your fringe for a bit it’s always a good idea to stop and evaluate where things stand like she does. Repeatedly.

In this case she’s going for a length ever so slightly past her eyebrows. (Of course being longer means trimming more often cause they’ll be in your eyes again before you know it faster. But once you’ve mastered the process, no biggie, right?) 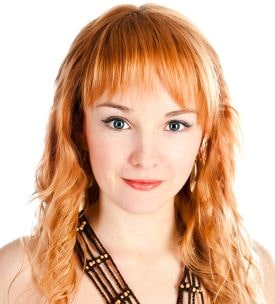 Taper the Very Center
When satisfied with the overall length it’s time to taper the hair in very center of your bangs – if you prefer a bit tapering.

You want to go a bit deeper into the fringe without going crazy. These are curtain bangs after all.

Pro Tip: You should ONLY ever work on dry hair. Otherwise you can’t clearly see what’s going on. That’s because when hair is wet it looks longer than it will end up being once dry.

Note another trick she uses. She taps her freshly shorn bangs to encourage them to fall where they normally would so she can see what’s what.

Deal with Face Framing Tendrils
The final step is to the give some love to the face framing bits of the bang. These tendrils can get too long too you know.

Here she changes her angle to go in at more of a slant. Towards her face. Remember that means you’ll be doing more chunking than finesse trimming.

Remember too when point cutting you’re trading time for control. Yes it take longer than making a sudden horizontal cut. But you minimize the risk of ending up looking like Spock from Star Trek!

So just take your time and you’ll get to a trimmed down fringe that looks exactly the way you want it to look.

Now I included this next clip because it brings up some different ways to trim up your curtain fringe.

How to Trim Thicker Bangs At Home Tutorial

Essential Step by Step by Timestamp

Clean Hair Is Best
It’s always a good idea to cut clean hair. So if nothing else wash just your bangs while bent over the sink using the least bit of shampoo no conditioner. This is a must do if you aren’t lathering up your entire head.

Blow Dry Them Flat
Blow them dry by brushing from side to side with the blow dryer held high and aimed down. An old standby approach that always works.

Separate the Bangs Out
You want to do this so you clearly see what hair you’re working on.

Tip: Always start small and just keep cutting until you get to where you want to go

Now she approaches point cutting slightly different than the first video. She does it with the blades at a slight angle. That means she’s removing more with each snip than if she strictly cut vertically into the hair. For those with experience it’s a good way to remove excess length faster.

Tip: Notice how she uses her finger as a guide. Rough cutting to that. Her goal is to get close to the desired length. Then perfect it with point cutting.

She looks to be cutting off more than a quarter inch. If you’re new to this I’d suggest you cut less to be safe. Then just keep cutting a little at a time until you hit the length you want.

Trimming Face Framing Pieces
Honestly felt she has a bit awkward of doing this. If would be better to bit of slide cutting.

If you need to get up speed on slide cutting is here’s a 45 second clip that gives you the gist.

Basically slide cutting is where you slide your scissors along the edge of those tendrils. Removing length as you go.

Doing that may help you avoid cutting too much off.

This stylist likes to open and close the blades of the scissor as he goes. Other just let the sharp edge of the blades take off the hair as they slide the shears downwards.

So there you go. Now buckle up. The compliments are about to fly!

Did you know we have Pinterest boards where our favorite hair care hacks like these are stashed? Why not check it out and pin for later anything that catches your eye! That way you’ll have the help you need to make the glam happen. 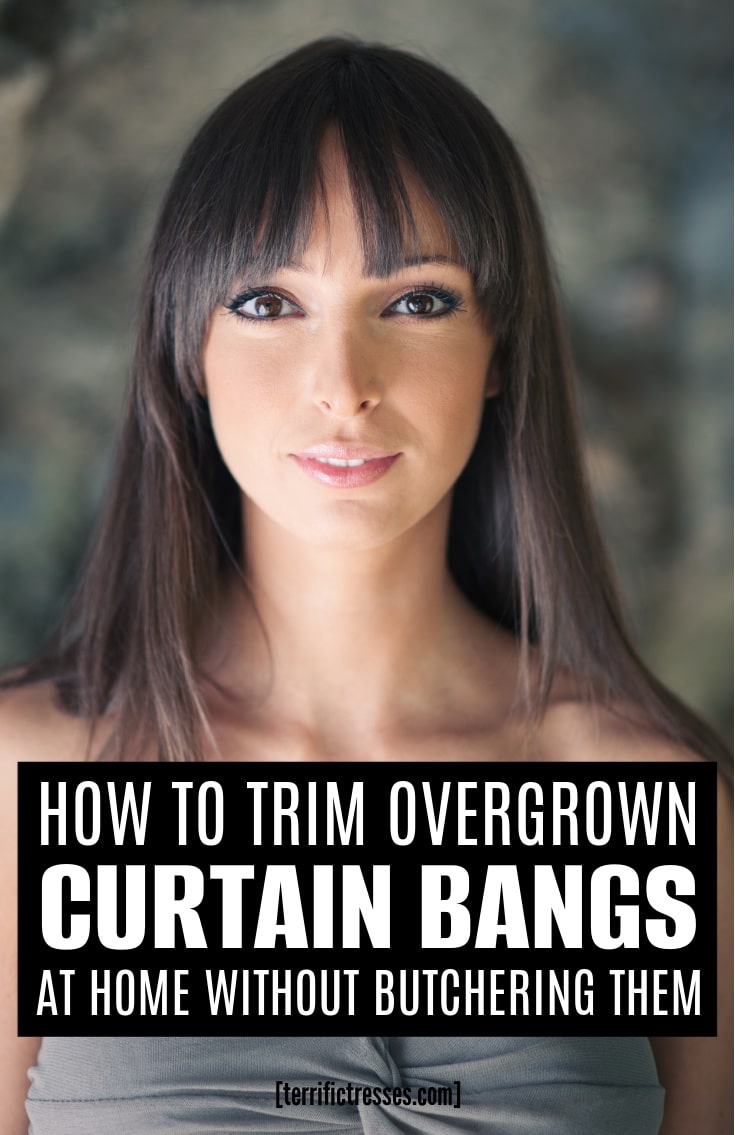