You are here: Home / short / 6 Cute Hairstyles For When Growing Out A Pixie Cut
Pin598
Share
Tweet
598 Shares

Desperate for ideas on how to style a pixie cut while growing it out?

Have you hit that stage where you feel like nothing works? Or that anything you try doesn’t exactly move the pretty meter?

So as a result you’re not exactly lovin’ your hair and are eager to get past this phase without losing your mind? 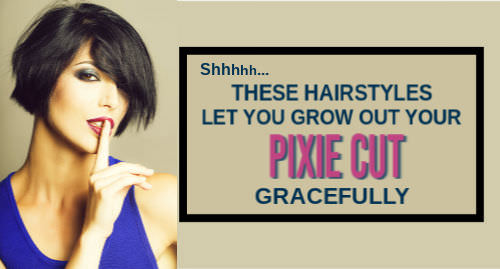 The good news is the styles shown here are the real deal for (very) short hair.

But that frustrating, in between, pixie grow out length.

As you’ll see they’re perfect for those in that no man’s land with hair maybe past, or halfway past, your ear yet nowhere near your chin.

So let the styling fun begin. 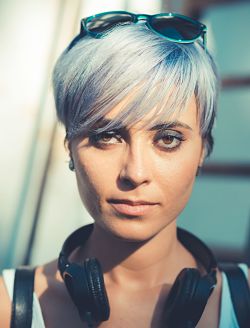 Cute Hairstyles For When Growing Out A Pixie Cut

First let’s back track to an important point.

Successful transition hairstyles start with the right hairstylist. You know one who is on board with what you are trying to do? Much like you did when deciding if you should get a pixie in the first place.

Plus they must have the skills to shape what length you’ve got at each stage so it at least looks somewhat sexy, edgy and flattering. Sorta like you are wearing your tresses that way on purpose?

Beyond that these first three hairstyles will have you looking at your grow out lengths in a whole new light.

Because they are perfect for that in-between stage or the point where it’s no longer a pixie yet your hair hasn’t quite reached the bob promised land yet either.

Brush out your hair and apply some kind of texturizer to bulk things up. She used dry shampoo.

Take a section of hair just to the side of your part.

Twist and add hair as you twist down the side of your head.

Stop when you reach your ear.

Carefully tug at the twist to give it some thickness and make it look more voluminous.

Next, turn your attention to the other side of your head. Grab a section and twist it.

Unlike on the first side it’s just a twist and pin. Like before pin that in place making sure the ends of your hair are pointing down. Tug at that like you did on the other side to again create the look of added fullness.

Viola. How cute is that?

So you’ve got a look that’s got something going for it while doing more than just remind you you’re stuck in the grow out twilight zone. 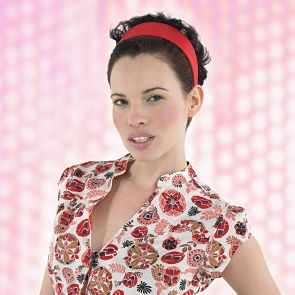 #2 Accessorize With A Headband

Brush your hair back away from your face.

Grab a section near the front on the crown of your hair. After spritzing with finishing hair spray do a bit of back combing.

Repeat with another section at the hairline on each side of that first one again just off your face.

In essence you’re building in some volume around the front part of your hair.

Smooth it out and grab your favorite headband. Position it toward the front in the middle of hair you just teased. That gives you lift in front and behind the accessory.

You can also gently tug some of the poofiness in front of the headband to bring it more to the in front.

Pull out some pieces in front of your ears to frame your face and you’re done.

The third style starts with a deep side part.

From that you’re going to do a Dutch Braid braiding the hair, like with the twist, to just past your ear.

Then go ahead and pancake that braid to give it some heft.

Tuck the hair on the other side below the part behind your ear and bobby pin as needed to keep it there.

Worried you’re not up to Dutch braiding? Explore the videos and tips we put together to help beginners get up to speed.

Up next are two more ideas in our parade of styling tips to try for when growing out a pixie cut.

Wanted: Fab Hairstyles For Growing Out A Pixie Cut

This video shows exactly, in slow motion almost at times, how to do a twist with your short locks with a side part. So if you didn’t exactly get it in the first video you hopefully will have it after watching this one.

Goal. Aside from looking totally put together and so darn cute, it’s to be able to do this without looking in a mirror. That way it will truly become an easy go to look you can do on the fly in minutes.

Isn’t just also just the perfect look for those who can’t braid their hair to save their life? Or if you don’t (yet) have enough length for the braid to hold.

#2: A Second Plot Twist and A Variation

Optional: As with the first video you can do a second simple twist on the opposite side securing the end with bobby pins too.

Variation: Part your hair in the middle. Then do the same twist on both sides so it looks kinda like you’ve got a little crown braid action going on. Devastatingly cool.

This polished style can take you from scruffy and out there to adorable and ah-mazing in next to no time.

Trust me. With this video tutorial nothing to make this easy is left out.

So I hope you find it exciting to have another way to style your growing out pixie. One that has the power to like totally revive any blossoming pixie in no time.

Now if you’re a braidy-lady, then further down the grow out road or if you had a long pixie or a pix with a longer bang, you may want to French braid that fringe.

This next tutorial shows you how to do that.

Pay particular attention just past the three minute mark. She makes a good point about how to direct your braid when adding in new sections of hair.

How To Do Pixie Braids

Step 1: Dirty Things Up
Given her hair is freshly washed she applied dry shampoo to help hold the plait together.

Step 2: French Plaiting
The trick is to angle the braid back towards your ear rather than just down the side of your face. Do that by grabbing new sections of hair further back on your head.

Yes you can try to pull it back to reposition it when done. But that doesn’t always work out as elegantly as you might hope. It can sometimes produce an unwanted bulge or bump in the plait.

Step 3: End of the Line
She discusses where to stop French braiding and how to end it.

Step 4: High Rise the Back
She finishes off by back combing the hair at the crown to give the look some semi-serious elevation. Then she gently smooths it out.

Step 5: The Lock Down
The last step is to hair spray to lock the look in place.

Now there’s one other thing we need to discuss here. That is the biggest frustration with growing out a pixie. And that usually isn’t how to style it.

Give up? It’s the dreaded mullet.

And it can spoil even the cutest hairstyle ideas you can conjure up. Which naturally leads to being asked… 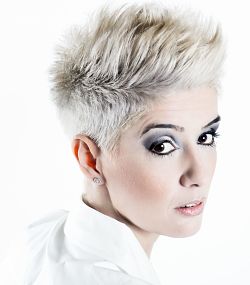 How To Avoid A Mullet When Growing Out A Pixie?

The question should really be more how to style a pixie mullet than how to avoid one.

And no look at growing out a pixie cut styles is complete without at least mentioning this stage.

Because preventing a mullet is something akin to Mission Impossible. But there are things you can do to keep the mullet action more or less in check.

First, be diligent about getting regular trims.

Second, see if you can’t keep the nape area as short as possible until the front sections hit the jaw length milestone. This styling trick may let you avoid a trip into the mullet zone.

Flat iron curling is another styling trick to make the natural tendency of the longer hair in the back to curl up seem more on purpose.

Again you need a stylist you can trust. One who understands you’re in the grow out phase. Who knows to trim the back hairline to match length of the sides while eliminating excess weight.

Remember too you’re always only one bad haircut away a months-long setback.

If your mullet insists on coming back, and it will, you’ll need to continue with the style saving trims. It’s all just an unavoidable growing out a pixie fact of life. Okay?

Before you go … we have a small favor to ask. 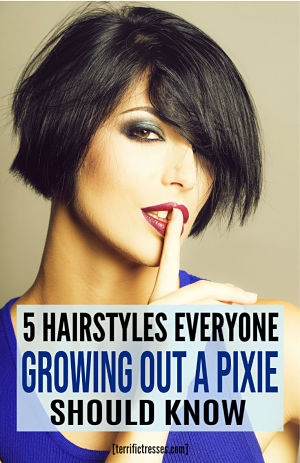 If you liked the ideas shared here for styling a pixie grow out maybe you’d like to follow our chic haircut board on Pinterest so you don’t miss any similar short hair styling ideas. 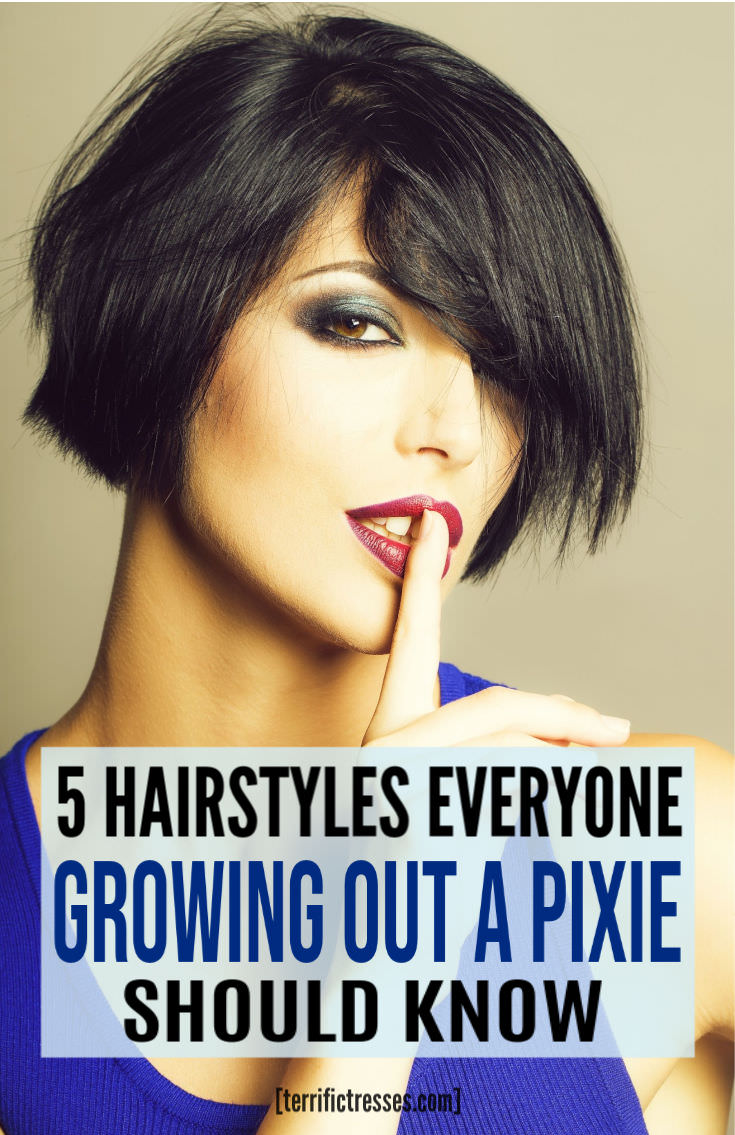